In Memory of
Stephen "Steve" Alfred
Cobb
1950 - 2020
Click above to light a memorial candle.
Memorial Candle Tribute From
Mattingley-Gardiner Funeral Home, P.A. and Crematory
"We are honored to provide this Book of Memories to the family."
View full message >>>
Send Flowers
Menu 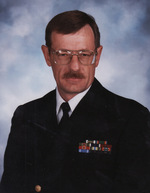 Stephen “Steve” Alfred Cobb, 70, of Hollywood, MD formerly from Newkirk, OK, passed away on September 12, 2020 in Washington, DC. He was born on February 16, 1950 in Ponca City, OK; and was the son of the late Beverly Jane Cobb and Earl Lynn Cobb. Steve was the loving husband of Shirley Cobb, whom he married on June 30, 1974 in Norfolk, VA. Steve is survived by his son Matthew Cobb of Hollywood, MD. Siblings; Lynne Ivie of Montezuma, Ga, Karen Hobson of Willingboro, NJ, Mary Ellen Riddick of Salinas, CA, Howard Cobb of Summerville, SC, and Russell Cobb of Newkirk, OK.

He graduated from Newkirk High School in 1968 and earned an Associate in Science from Florida Junior College in Jacksonville, FL.

The family will receive friends on Monday, September 21, 2020 from 1:30 PM to 2:30 PM in the Mattingley-Gardiner Funeral Home Leonardtown, MD. A Funeral Service will follow at 2:30 PM in the Funeral Home Chapel with Pastor Dan Moore officiating. Interment will be held on Tuesday, February 23, 2021 at 11:00 AM in Arlington National Cemetery Arlington, VA. Friends will need to arrive by 10:15 AM at the Administration Building at Arlington National Cemetery.