To share your memory on the wall of John Howe, sign in using one of the following options:

In addition to his parents, John was predeceased by his sister Maryann Shaw of Oregon, Dorothy Skok of Great Mills, MD and brothers, James Howe of Hollywood, MD and Paul of Leonardtown, MD.

All Funeral Services will be private.
Read Less

Receive notifications about information and event scheduling for John

We encourage you to share your most beloved memories of John here, so that the family and other loved ones can always see it. You can upload cherished photographs, or share your favorite stories, and can even comment on those shared by others.

Posted Feb 08, 2021 at 02:18pm
Dear Doris, Mike, Jamie, Binks, and Wally,
I am so sorry to hear of your father's and husband's passing, he was a very nice man and always was friendly to me. I know this is a hard time for you all. You are all in my thoughts and prayers.

Posted Feb 06, 2021 at 01:16pm
To All the family
So sorry for your loss I have know John all of my life it was a good mechanic -i remember him also down at the Ice Plant
John was a hard working man always happy & friendly .May he RIP and May the Lord give peace & comfort to the Family in the sad days ahead God Bless
Comment Share
Share via:
LG

Posted Feb 06, 2021 at 11:13am
James, Mrs. Howe and the rest of the family, sorry to hear of John's passing. He was a very dependable mechanic and always ready to help out when needed. Lenny GUY

Posted Feb 05, 2021 at 12:37pm
fiy high my brother glad you ate at peace and no more pain I will love and miss you forever your sister susie
Comment Share
Share via:
SR

Posted Feb 05, 2021 at 09:11am
Doris and family. please accept my sincerest condolences on John's passing. He was a good man.
John O. Thompson
Comment Share
Share via: 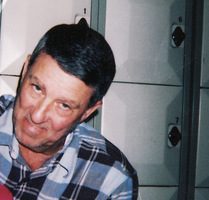