To share your memory on the wall of James Tennyson, sign in using one of the following options:

Print
James Thomas Tennyson, “JimTom”,94, of Mechanicsville, MD, passed away peacefully at his home, surrounded by his loving wife and family, on March 23, 2021.

Jim Tom lived his entire life in St. Mary’s County. He was born on Janua... Read More
James Thomas Tennyson, “JimTom”,94, of Mechanicsville, MD, passed away peacefully at his home, surrounded by his loving wife and family, on March 23, 2021.

Jim Tom lived his entire life in St. Mary’s County. He was born on January 5, 1927, to the late Ira Francis and Mary Alberta Guy Tennyson of Clements, MD.

Jim Tom is survived by his wife, Marion Cecil Tennyson, whom he married on August 22, 1953, at Holy Face Church in Great Mills, MD, and his seven children, Joe Mike Tennyson (Kim Newton), Carolyn Berger (Tom), Rosella Nicolet (Buddy), Barbara Lacey (Bill), Kelly Goldsborough (Chris), Francis Tennyson (Lisa), and Patrick Tennyson (Ellie). He had 18 grandchildren, 14 great grandchildren and numerous nieces and nephews. He was preceded in death by his granddaughter, Lee Lee Massey. He always bragged that he had the best family in St. Mary’s County.

Jim Tom grew up on a farm. He learned early in life that hard work and dedication yielded many benefits. He grew tobacco, as many of the locals did “back in the day”. But, with a growing family the need arose to broaden his work resume. He was handy with a hammer and a saw, so carpentry was a logical choice. He worked for many years in the building industry in Charles and St. Mary’s Counties, eventually starting his own company building custom homes. Farming was still an important part of his life, and until the day he passed away, he was making plans for the spring garden.

Jim Tom loved sports, as a player and a fan. But his favorite sport was baseball. He was instrumental in organizing the first St. Mary’s County youth baseball teams. He played as a youth, as an adult, and later in life as a manager. He was particularly proud to have managed the St. Mary’s County Men’s Senior Olympics Team. His dedication to the sport and continued involvement with the baseball/softball teams in the County led to his induction as a member of the St. Mary’s County Softball Hall of Fame. And, how about those Orioles! They were his favorite (and not so favorite, depending on the day) team, and he could give you a play by play description of every game.

Hunting was another past time. He was a terrific shot, bagging many a bird, rabbit, or squirrel for dinner. But, as the years went on and the quail faded, he found his true passion. CARDS! Any game, any time. He loved playing rummy, pitch, poker, even solitaire. He was a member of the Mechanicsville Moose Lodge and enjoyed participating in the weekly pitch games. He played cards with family and friends, hosted his own semi-annual pitch tournaments, played poker in Las Vegas, Atlantic City and Dover Downs, and is probably playing cards in Heaven right now.

Jim Tom was a humble man. He served on the Democratic Central Committee, in his early days, and continued to believe that taking the time to listen and having a kind word for everyone, was an important part of the moral character of St. Mary’s County. He dreamed big things, built beautiful homes, and brought joy to so many people. Leonardo da Vinci once said “As a well spent day brings happy sleep, so life well used brings happy death”. Jim Tom spent each and every day on earth to the fullest. He slept well, and will continue to slumber peacefully and happily in the afterlife.

The family will receive relatives and friends on Monday, April 5, 2021, from 9:00 to 10:00 AM in the Mattingley-Gardiner Funeral Home, Leonardtown, MD. A Mass of Christian Burial will be held at 10:30 AM in St. Joseph’s Catholic Church in Morganza, MD. Interment will follow at Queen of Peace Catholic Cemetery.
Serving as Pallbearers will be his grandsons; Jason Beavers, JD Tennyson, Ryan Goldsborough, Daniel Berger, Christopher Tennyson, Joseph Tennyson and Kyle Nicolet. Honorary Pallbearers will be Alvin Tippett, Mike Burroughs, Jennings Anderson, Bo Tennyson, Joe Johnson, Zack Wood, Dr. John Roach, Tony Adams, Jackie Alvey, and all his fellow card players.

Receive notifications about information and event scheduling for James

We encourage you to share your most beloved memories of James here, so that the family and other loved ones can always see it. You can upload cherished photographs, or share your favorite stories, and can even comment on those shared by others.

Michael Jones, John and Brenda Ryan, and other have sent flowers to the family of James Thomas "Jim Tom" Tennyson.
Show you care by sending flowers

Posted Apr 01, 2021 at 10:36pm
This is perhaps the most beautiful obituary of a life well lived. Mr. Tennyson and family were parishioners with my family for many years at St. Joseph’s, always a gentleman with a lovely smile and beautiful family as he would attest. May you find joy and peace in his memories and faith in his everlasting life.
Comment Share
Share via:
CM

Posted Apr 01, 2021 at 03:38pm
Sincere sympathies to the family and friends of Mr. Jim Tom Tennyson. I 'm sure he was met by many family members and friends, who had gone before him. He and Mrs. Tennyson attended St. Joseph's Church and sometimes I would be seated behind them.
He would acknowledge you with a slight wave or a nod and smiling the whole time. Rest in peace Mr. Jim Tom.....
Cathy (Guy) Mattingly
Comment Share
Share via:
DG 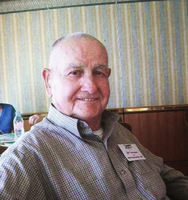