In Memory of
Agnes "Mildred"
Vallandingham
1926 - 2021
Click above to light a memorial candle.
Memorial Candle Tribute From
Mattingley-Gardiner Funeral Home, P.A. and Crematory
"We are honored to provide this Book of Memories to the family."
View full message >>>
Send Flowers
Menu 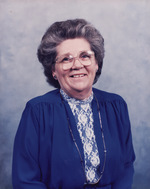 Agnes “Mildred” Vallandingham (Lacey), 94, of Leonardtown, previously of Helen, MD passed away peacefully on Wednesday, May 5, 2021 at St. Mary’s Nursing Center in Leonardtown, MD.
Mildred was born on July 2, 1926 in Maddox, MD, to the late William Dudley and Mary Elsie (Knott) Lacey. She married Robert Luke Ferguson of Hollywood, MD on January 19, 1948. Together, they had two children, Robert Luke Ferguson Jr. (deceased) and Barbara Claire Nelson. He preceded her in death on November 28, 1963. She then married Clarence Aloysius Vallandingham of Helen, MD on November 29, 1974. He preceded her in death on October 12, 2004.

Mildred was a lifelong resident of St. Mary’s County. She worked at the A&P Grocery store and Rosenburg’s store and Hall’s Shoes and Clothing in Hollywood. She worked at Hall’s for 36 years before retiring in 2004. Mildred enjoyed several hobbies including selling Avon and playing pitch with family and friends. Her greatest passion though was her family.

The family will receive friends on Friday, May 14, 2021 from 9:00-10:00 at the Mattingly Gardiner Funeral Home in Leonardtown, MD. A Mass of Christian burial will be celebrated on Friday, May 14, 2021 at 10:30 AM in St. John’s Catholic Church, Hollywood, MD with Father Ray Schmidt officiating. Interment will follow in the St. John’s Catholic Church Cemetery. Serving as Pallbearers will be Dallas Hill, Mike Vallandingham, Frankie Vallandingham, Dennis Spalding, John Hall, and Kenny Wood. Honorary Pallbearers will be Bernard Magill and JC Vallandingham.

Memorial contributions in memory of Mildred may be made to the St. Mary’s Nursing Center Foundation, Leonardtown, MD and/or St. John’s Catholic Church, Hollywood, MD.