To share your memory on the wall of Roy Stamm, sign in using one of the following options:

Print
Roy Steven Stamm, 72, of Bushwood Maryland passed away peacefully in his home, surrounded by his loving family on May 13, 2021. He was born on May 5, 1949 to the late Roland Stamm and Linda Engelskirch Stamm.

Roy was a veteran and proudl... Read More
Roy Steven Stamm, 72, of Bushwood Maryland passed away peacefully in his home, surrounded by his loving family on May 13, 2021. He was born on May 5, 1949 to the late Roland Stamm and Linda Engelskirch Stamm.

Roy was a veteran and proudly served his country. He was drafted into the army in 1969 and served with the 199th Light Infantry Brigade in Vietnam. While there, he was wounded and was awarded the Purple Heart Medal. Following his discharge in 1971 he went on to complete a degree in criminal justice and joined the Prince Georges County Police Department. He spent almost 30 years in law enforcement before retiring as a lieutenant in 1996. He then went on to work for the St. Mary’s County school system as a computer networker. However, if you were to ask him what his greatest accomplishment was, he would readily tell you it was his four amazing children.

Roy could most often be found in his garage. He had a love of classic cars, owning and repairing many of them over his lifetime, including most recently his 1978 El Camino. He also loved coaching soccer and spent 20 years managing the indoor soccer league for St. Mary’s County Parks and Recreation.

Those close to him would describe him as loyal, honest, brave and strong. He was a jack of all trades and if something was broken, he could fix it. Making friends wherever he went, he had an incredible sense of humor (although sarcastic at times) and was an entertaining storyteller to say the least. Above all, he was a family man and would do anything for them. He married his beloved wife Sheryl in 1982 and they spent 38 wonderful years of marriage together.

He is preceded in death by his parents, Roland and Linda Stamm, and his grandson, Joey Lee Williams Jr.

The family will receive friends on Tuesday, May 18, 2021 from 5:00 to 8:00 Pm with prayers recited at 7:00 PM in the Mattingley-Gardiner Funeral Home Leonardtown, MD; Where a Funeral Service will be held in the Funeral Home Chapel on Wednesday, May 19, 2021 at 10:00 AM with Terry Hayes officiating. Interment will follow in Charles Memorial Gardens Leonardtown, MD.

Condolences may be made to the family at www.mgfh.com Arrangements provided by the Mattingley-Gardiner Funeral Home, P.A. & Crematory Leonardtown, MD.
Read Less

Receive notifications about information and event scheduling for Roy

We encourage you to share your most beloved memories of Roy here, so that the family and other loved ones can always see it. You can upload cherished photographs, or share your favorite stories, and can even comment on those shared by others.

Deborah Zabel Barnes, Garrie Friend, and other have sent flowers to the family of Roy Steven Stamm.
Show you care by sending flowers

Posted May 28, 2021 at 04:04pm
My deepest condolences to Sheryl and family on Roy's passing. Having known him for over 25 years, he was always a joy to talk with. If you were in a bad mood, it wouldn't be for long once you started talking with Roy! My most recent recollection was all the years he ran the Leonard Hall Drill Hall for the indoor soccer leagues. I watched him treat that place like a second home! Parks and Recreation was lucky to have him. God be with him.

Posted May 23, 2021 at 06:38pm
I served with Roy with the 199th near the end of my tour. I still can recognize that smile. Please accept my condolences.
Comment Share
Share via:
DB

Posted May 18, 2021 at 09:12pm
I will miss my Uncle Roy very much. I will never forget the fun times as a young child with Jennifer and Pam(Bam Bam). Whenever Uncle Roy was around it was happy and I will always cherish my memories of that time in my youth. I have since forgiven him for throwing me fully clothed in a pool. :-)

Posted May 18, 2021 at 05:15pm
Joseph and Bonnie Skane send condolences to all the Stamm Family. We are sorry for your loss. We send prayers your way with many wonderful memories of our growing up years on Roland and Linda's tobacco Farm. Growing up together was fun. Learning together, We came to appreciate family and the Love we have for each other. We treasure the many moments we shared over many years. The Love is the same today, as it was yesterday. Our Father in heaven loves each of us for the good we do perform in our journey in life. We love knowing that we can talk with Deity, when we need assistance from beyond the veil. You are all appreciated, each of you, and we are saddened for the loss of Roy, and we are comforted by knowning we will see him again in the future. Joe and Bonnie Skane.
Comment Share
Share via: 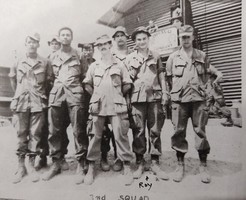