In Memory of
Frances Jacqueline
Bond
1933 - 2021
Click above to light a memorial candle.
Memorial Candle Tribute From
Mattingley-Gardiner Funeral Home, P.A. and Crematory
"We are honored to provide this Book of Memories to the family."
View full message >>>
Send Flowers
Menu 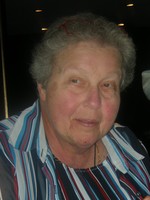 She was a lifelong St. Mary’s County, MD resident and graduated from St. Mary’s Academy in 1952. Jackie attended Immaculata College and Strayer Business School in Washington, DC. She was a Management Analyst for the Federal Government at Patuxent River Naval Air Station from 1956 to 1993; retiring after 37 years.

The family will receive friends on Tuesday, May 25, 2021 from 9:30 AM to 10:30 AM in St. John’s Catholic Church Hollywood, MD; where a Mass of Christian Burial will be celebrated at 10:30 AM with Father Raymond Schmidt officiating, and Deacon Ammon Ripple Con Celebrating. Interment will follow in St. Andrews Episcopal Cemetery California, MD. Serving as pallbearers will be Doug Bond, Dale Dean, John (Hank) Hayden, Tom Bond, Jack Bond, and Duke Bond.