In Memory of
Frances Arleen "Frankie"
Gass
1943 - 2021
Click above to light a memorial candle.
Memorial Candle Tribute From
Mattingley-Gardiner Funeral Home, P.A. and Crematory
"We are honored to provide this Book of Memories to the family."
View full message >>>
Send Flowers
Menu 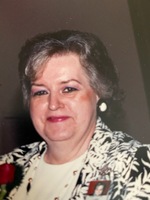 Frances Arleen “Frankie” Gass, 78, of Hollywood, MD, passed away on June 2, 2021 with her family by her side. Born January 2, 1943 in Washington, DC, she was the loving daughter of the late Paul Benjamin Wise and Mable Virginia Holt Wise.

Frankie was the loving wife of Robert Merrill Gass, Sr., whom she married on January 2, 1959 in St. Joseph’s Church, Morganza, MD.

In addition to her husband, she is survived by her children Robert “Robby” Gass, Jr. of Hollywood, MD, Donald “Tony” (Bridget) Gass of Bryantown, MD, Donna (Mike) Childers of Clements, MD, Brenda (Paul) Clements of California, MD, and Brian Patrick Gass of Hollywood, MD, as well as her siblings Mary Ann Turner of Mechanicsville, MD, Shirley K. Miedzinski of Hollywood, MD, Joan Gayle Nelson of Mechanicsville, MD John D. Wise of Avenue, MD, 16 grandchildren, and 23 great-grandchildren. She was preceded in death by her siblings Paul Benjamin Wise, Jr., Thomas C. Wise, and Debra A. Johnson.
She was a lifelong resident of St. Mary’s County, MD, and attended Margaret Brent High School. Frankie was a Custodial Supervisor for the U.S. Capital for 23 years, retiring in 1998.

Frankie enjoyed bingo, crocheting, vacations with her sisters, and being a grandma. She also enjoyed her family and friends.

The family will receive friends on Monday, June 14, 2021 from 5:00 PM to 8:00 PM in the Mattingley-Gardiner Funeral Home, Leonardtown, MD with prayers recited at 7:00 PM. A Mass of Christian burial will be celebrated on Tuesday, June 15, 2021 at 10:00 AM in St. John’s Church, Hollywood, MD, with Father Raymond Schmidt officiating. Interment will follow in Charles Memorial Gardens. Serving as pallbearers will be Ron Cummings, Dorian Queener, Richard Abell, Brandon Gass, Shane Gass, and Andrew Rabe. Honorary pallbearers will be Connor Russell, Landon Russell, and Michael Gass.