In Memory of
Paul Elmer "Dinky"
Connelly
1963 - 2022
Click above to light a memorial candle.
Memorial Candle Tribute From
Mattingley-Gardiner Funeral Home, P.A. and Crematory
"We are honored to provide this Book of Memories to the family."
View full message >>>
Send Flowers
Menu 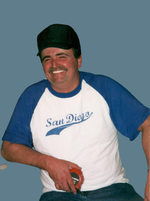 Paul was a lifelong St. Mary’s County, MD resident and graduated from Leonardtown High School in 1982. He worked as a meat cutter in Hollywood, MD for 39 years, retiring on April 12,2022.

The family will receive friends on Monday, August 15, 2022 from 5:00 PM to 8:00 PM with prayers recited at 7:00 PM in the Mattingley-Gardiner Funeral Home, Leonardtown, MD. A funeral service will be held on Tuesday, August 16, 2022 at 10:00 AM in the funeral home chapel with Deacon Ammon Ripple officiating. Interment will follow in Queen of Peace Catholic Cemetery, Helen, MD. Serving as pallbearers will be William Connelly, James Connelly, John Connelly, Tim Quade, Justin Quade, and Dalton Walker. Honorary pallbearers will be Timmy Quade, Tom Quade, Donald Tinsley, Robert Tinsley, Joe Stone, and George “Critter” Barnes.

Condolences may be made to the family at www.mgfh.com.